Stilbaai, also known as the Bay of Sleeping Beauty, is a town along the southern coast of South Africa about four hours by car from Cape Town. It is part of the Hessequa Local Municipality in the Western Cape province.

Stilbaai has a temperate climate and receives almost the same amount of rainfall in all four seasons, with peaks in autumn and spring. Temperature averages between 20° and 28° Celsius in the summer and between 12° and 20° Celsius in the winter. Rainfall is 639,2 mm per annum on average.

Stilbaai is host to a number of interesting archaeological sites, including ancient fish traps thought to have been built by early ancestors of the Khoi people of the Southern Cape, and a shell landfill that has been carbon dated to around 1000 BC.

Another archaeological site is situated in a group of caves at Blombos cave, about 12 kilometres from Stilbaai. Artifacts found at Blombos have been carbon dated to around 77,000 BP, making it the oldest known human settlement today. 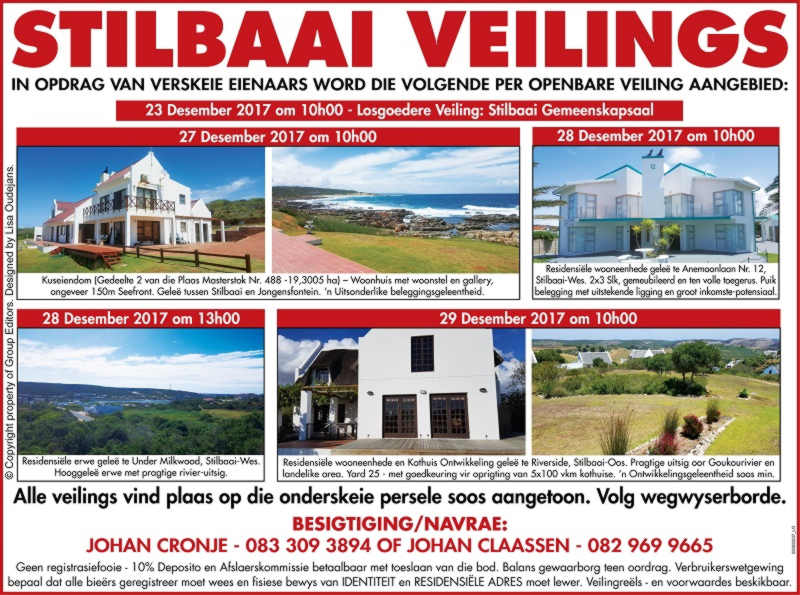 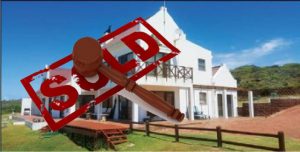 A marvellous coastal property of 19,3005 hectares situated between Still Bay and Jongensfontein – Section 2 of the Farm Masterstok No 488.

This improved property has an elegant residence consisting of a lounge, dining-room, TV- room, studio, kitchen, laundry as well as 3 bedrooms with en-suite bathrooms. Large windows for optimal enjoyment of the view over the sea. Step outside on the covered veranda and large paved area from where you can relax and drink in the different moods of the sea.

This is a fully furnished architectonic double storey residence consisting of two units with 3 bedrooms each. The main bedrooms are on the top floor together with the lounges and kitchens. The other bedrooms are on the ground floor and they share two bathrooms. Each unit has a separate TV-room.

The kitchens are fully equipped with stoves, ovens, microwave ovens as well as fridges- and-freezers. Furthermore each unit also has their own washing machine.

In addition each apartment has its own balcony on the top floor with built-in barbecues….Read more

Plots in Under Milkwood, Still Bay

High-lying plots/stands with a splendid view over the lovely Goukou River, Still Bay and area….Read more

High-lying plots/stands with a splendid view over the lovely Goukou River, Still Bay and area. 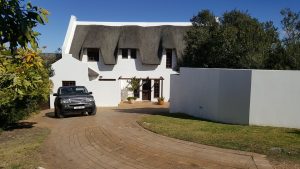 This property is surrounded by communal open space.

Improved with a graceful and spacious double storey homestead consisting of 2 en-suite bedrooms on the top level with an own sitting area. The ground floor has a lounge, dining- room, open-plan kitchen, bedroom with en-suite bathroom, wooden patio deck with a splash pool and a double garage.

This charming whitewashed building with the thatched roof is situated in the peaceful rural development of Riverside, approximately 10km outside Still Bay. It has an exquisite view over the Goukou River and country area….Read more 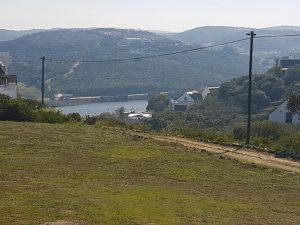 This property comes with approval for the erection of 5x100sqm cottages.

It has been further improved with Unit 32 consisting of a double garage as well as a Plethuis on the premises.

The architectonical guidelines are the same as for the existing houses and cottages in Riverside. Instead of a thatched roof, alloy zinc may be also used. There is no time-limit for building your house.

The footprint allows you to build a 100 square meter double volume house. Separate title acts can be obtained for every real right.

Access to the inviting river, which is between 250 to 350 meters away, is available at all times.

Water and electricity connections are already done on the plots. Five electricity meters are installed and water and sewerage are available….Read more